I’m serious. I just start moving around my living room like it is a dance club and just rock out. I don’t quite know why people are embarrassed to admit what they do when no one is looking…it isn’t as if the rest of the world isn’t just as ridiculously nerdy or strange…

Tomorrow marks 30 days since I dropped Facebook like a bad habit and I’m going to be celebrating it by going out and getting my hair cut. My roommate has been urging me to get a faux-hawk. I would get one too if I didn’t have to have a somewhat professional appearance for work. I’m going to see what the stylist thinks. My roommate is bringing me to Walmart to get my hair cut…cuz the stylists there have more experience than the place in the mall…

Can I just put it out there that the number of years one does something doesn’t always denote capability? I know teachers who have sucked for many years, and yet…they are tenured. Cops, security guards, babysitters, Executive Directors….I mean yes they must have some skill to be in the position that they are in, but that doesn’t always mean that they have what it takes. I can go out right now and talk my way into any job I want, simply because I know how to bullshit.

Not saying that I actually do that because I like knowing how to do my job. It means more money for me when it is time to be recognized. Just saying…

So we shall see how tomorrow goes. Afterwards we are meeting up with a mutual friend for a girl’s lunch before I have to go to work, which blows three ways from Sunday…which is tomorrow.

If I didn’t already admit that I’m not a religious person, I would totally play the “It’s a holy rest day” on my boss. I simply hate working on Sundays, and Mondays…Actually I hate working any day that ends with a Y. The whole working until you die thing isn’t my cuppa (aussie slang for cup of tea). Now I do enjoy working when it is something that is worthwhile and rewarding, which is why I kind of feel like blogging is starting to become a job… which is perfectly okay with me because I get to share my insanity with the rest of the world…well…with 66 people at least.

Which is awesome by the way. Thanks for reading, and commenting, and conversing with me…It’s why I started.

So haircut, food, and work…and then hopefully Monday I will not be called in because I desperately need to do my laundry, and file my taxes, and mail out important forms, and all the responsible things one needs to do after they turn 18.

Whoever decided that half of this crap in our lives is necessary needed to be shot, then stabbed with a dull blade….yea I’m not hiding my feelings about that.

I actually blame my randomness these last few posts on Nanalew and Meekakity, two Vloggers on Youtube. Check them out…I’m the last person who enjoys random stupidity (I fell asleep during Superbad and I might be the only person on this planet who did not find the Hangover hilarious), but these girls are hilarious.

I haven’t done shameless plugging in a while…it felt good to get it out.

I’m sorry for posting days 28 and 29 together, I really wasn’t in the mood to iron out day 28 yesterday, and just didn’t want to leave the warmth of my bed. My roommate threw open a lot of the windows to try to get fresh air into the apartment, and I was too lazy last night to close them. So I woke up this morning and was greeted by Penguins waddling around my room.

I exaggerate obviously…they weren’t waddling they were sliding.

I also had no sleep today…well some sleep…I went to bed at a quarter to 11 this morning and woke up around 2:30. I’m pretty sure my phone is now failing at life because I scared some of the parts out of it with my death glare. But there was no leaving my bed until I had no choice because I was late for work…as par for the course on a Saturday since my co-worker is a ridiculously awesome person and doesn’t rag on me for being late. Although I’m trying not to make it a habit since I don’t want to be that guy…girl…whatevs…

I honestly think that I am staying in Corn-country, despite really wanting to take the job in Baltimore or Harlem if they are offered, just to see where this life takes me…as long as I’m not sitting here 8 years still in Corn-Country. I need ocean….I need random late-night adventures…there is nooothing here.

A big mall, 1 of 6 Giant Skillets our country proudly boasts, and the Field of Dreams….and naturally….corn. The cows are begging me to help them commit suicide…and what the hell!!! Rhe Wild turkeys are Kamikaze-ing their way along the roads out here. Many accidents thanks to the crazy birds.…

I need lights, and honking horns, and craziness mixed in with my moments of peace. I want Broadway shows, and I want to see LA…..I don’t need depressed poultry…

My co-worker said that I was a go-getter type person for leaving NY. I can’t exactly remember the terms she used, she was having a bad day…This is the note she left me at the end of the story that she is editing for me:

“Faith: It’s ok I’m having issues of my own…. let’s see if I can remember how I phrased it on that social site.

It was a typical Friday, then after lunch I felt as if I was thrust into an episode of Survivor. I heard the following words float through my mind…

The Tribe has Spoken!! As the smell of ash filled my nose and my torch was snuffed out. I wonder, would sitting in the Board Room with the Donald have smelled any sweeter?

It’s a not so long, but a personal story that I won’t post, but I felt bad that she had a rough day. I’m going to help her out with some things, utilize my English Studies skills and whatnot. But she did say that I was, I guess, cool for getting up and going and exploring the world. For following the wind, and doing what I had to do to survive my whimsical, vagabond ways…my family thinks I’m just insane.

But, for today…that is okay. I have my days where I want nothing more than a home…and then there are days where I’m packing my bags and leaving the State on a whim.

Maybe things will change for me within the next year. I might fall in love, settle down, smooth out my rough edges…or I might be writing to you from another country. It’s all good…because today I’m going to dance in my living room, and listen to music, and talk with the girl who changed my life significantly in the last 29 days…It’s crazy to think about how much Facebook had dominated my life before I walked away from it…*sigh*…

Random whimsy of a ridiculous life. What makes it all worse is that my life really isn’t that crazy…it’s pretty boring…lots of wall staring and the like…and seriously this girl has me babbling everywhere I go so now I’m done. I’m going to go and listen to Nanalew and Meekakity and dance.

ps. I donated plasma again. Here’s a picture of the operation of it all…if you get squeamish around blood or that sort of thing just hop passed it to the Q.O.D. I have 4 tattoos, needles and getting poked doesn’t really bother me. I would also be a terrible EMT if I couldn’t handle blood. 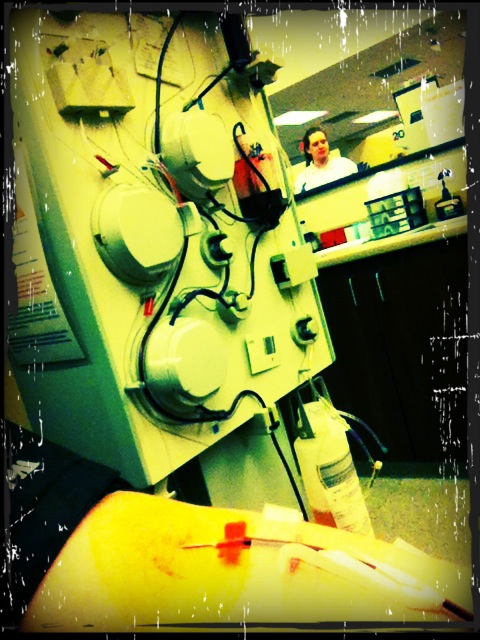 Question of the Day:

What moments are precious for you?

2 thoughts on “Day 29: “I Practice Hip-Hop Dancing When No One Is Looking””